I felt the desire to torment my submissive partner on webcam once more. It will feature boot worship, CBT and NT. You can witness his demise here tonight (Tuesday 22nd September), 10pm - 12am GMT:
http://www.adultwork.com/ViewProfile.asp?UserID=3119423 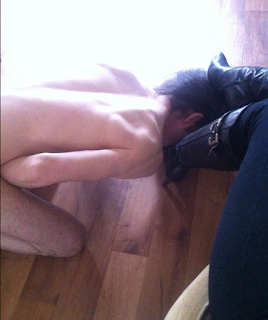 In other news, I attended my first Slayers Party, organised by the fantastic Amy Hunter on September 16th. The next event is October 22nd, a few minutes stroll from Angel station. Whether I go to the next one or not, it is seriously recommended for CP enthusiasts of all levels.

On September 19th I had the unforgettable experience of chasing (nearly) naked men through the woods of Kent, armed with a paintball gun and a deviant glint in my eye. This event is known as The Cruel Huntress, and has occurred a few times per year for the past 6 years. I first read about it back in the days of IC, and had never managed to go due to schedule conflicts until earlier this year. It is without question, the best event I have ever been to in 16 years! There are Huntresses and prey in an escape and evasion hunt, with dire consequences if the prey are caught! They have a group on Fetlife, where you can read many threads about it.