Monday and Tuesday last week was spent filming at the beautiful Ess & Emm in Warwickshire. Having wanted to visit the venue for quite some time only added to the pleasure of filming with some sterling people. My phone picture here was taken on the sly right before we left, but I recommend that you have a look at the images on their site. 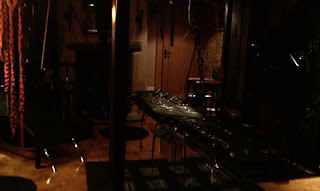 Also adding to the illicit finery was the equally fine Mistress Eleise. Together we used and abused 4 pathetic specimens until we were sated. It will be a few months before anything is online and all is ready for lift off, but in the meantime you can email me to request specific scenarios for consideration. 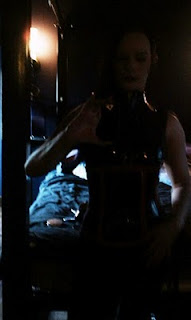 (quick picture before a latex scene in a very dark room!)

The best thing about it was while most of them were pre-written scenes, all of the action was authentically enjoyed by all. I personally REALLY dislike adult films of any kind where you can clearly tell those involved aren't into what they're doing. I'm dominant in my personal life and consider myself to be very lucky indeed to make a living from what I enjoy. Before I left the Warren St dungeon last night I had a conversation with the owner about people who work in the scene, but who are not into it personally. While I don't mind this so long as it's done both well and safely, it's much better to achieve job satisfaction!
Posted by Rebekka Raynor at 12:56 am