I've been thinking about a client who used to see me years ago back in Edinburgh, brought on by seeing a brand of wine he used to bring me (Chateauneuf du Pape, as it happens). The sight is not a rarity at Raynor Towers, but my mind wandered down memory lane of deviant deeds past.

I would have fun with him on Princes Street (which is the equivalent of Oxford Street in London for those not in the know), him following while I wore my best pair of spiked boots accompanied with tight leather trousers. At random points along our path I'd snap my fingers and he'd fall to his knees and kiss them. I'd snap again to summon him to rise, sometimes lingering over the expression of humiliation and fear on his face as his lips caressed my boots but his eyes darted round in all directions to the people around us, like a gazelle looking for lions. I drank in his fear. Once I was sufficiently sated, we'd continue our stroll, him a few paces behind me. He'd take the abuse because he adored me, knowing that putting him though uncomfortable situations was part of how I had my thrills with him. Once we walked from the East to the West end, there was a short walk to the dungeon where he'd continue being a conduit for my amusement, albeit in a more physically sadistic way.

I wanted him fearful after our walks. If he came to visit me straight from the office, he would of course feel the heightening sense of excitement and unease during the day, but nothing even close to way he'd feel after being made to repeatedly kiss my boots on the cities busiest shopping street.

Those were the days. I hired premises near Haymarket station from a Mistress who was operating at the time, Mistress Ava. Some of you may remember her.

Back then I used a different email address before the move to London and subsequently lost touch with a few people who used to reach the parts no other slaves could reach. If this is you, I'd love to see your tongue on my boots on Oxford Street.

And for your viewing pleasure, here is me with a new friend at Club Rub last weekend. 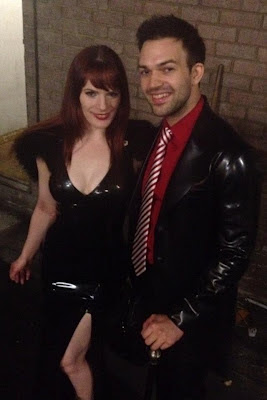 Posted by Rebekka Raynor at 2:26 pm