I shot for a CFNM company last week who I dealt with a couple of times last year. Their shoots are great - the sort of no expense spared, highly produced end of the scale (including a runner who lubed people up!) For those unfamiliar with CFNM, it's clothed females tormenting and humiliating a naked male, sometimes into orgasm (though I only watch the latter part) Usually the scenarios are based on every day events, but these ones had a more SM feel to them.

I'll recount excerpts from two of the scenes we did, if only to remember them more clearly.

a). The boy's hands were bound to a ring on the wall above his head, with his genitals bound and attached to another ring three metres away at crotch level on another wall. This kept him nicely in place, able to attempt to dodge the blows from the whips of two women, but ultimately failing. We could only mark him for a few days, but enjoyable none the less.

b). With him on all fours, tethered to the wall from the ropes around his balls, Tazmin teased him with her naked womanhood, causing the bindings to strain as he reached for her with his mouth. Close enough to smell her scent, too far to taste. It was fun to stand behind him with a TAZapper, tormenting his balls and ass cheeks, stretching his flesh ever further forward towards the prize.

c). Firmly secured to the spanking bench, every thrust from me behind him forced his mouth lower onto the shaft of Tazmin. He'd never fellated before, which only served to make his gagging more intense. There was a nice amount of drool on the floor afterwards. We tried him out at first with a cock that was 6” and fairly narrow, which was taken well. The 9” one was only just taken and no more. Not bad for a beginner. 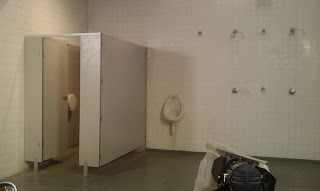 Here's an image of one of the purpose built sets. Note the metal rings on the walls between the shower heads. Very useful.
Posted by Rebekka Raynor at 12:46 am