Last month's cuckolding session, and the next!

Years ago I had never enjoyed the thought of cuckolding sessions, though I had done similar in private. If you are familiar with my modelling work then you will realise that I'm somewhat of an exhibitionist. That, coupled with a love of exquisite torture is a match well met. 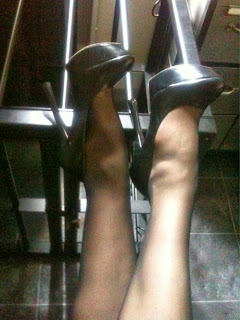 The forced bi/cuckolding day with the 23 year old last month went well very indeed. Egos were crushed, body parts violated and of course - Veni, vidi, vici! The first time he was utilised, he joined a slave and I for the last 30 minutes of a two hour session, those first two hours focusing on CP. The final 30 minutes were spent with them giving me visual gratification, almost like jesters performing for the amusement of the court. The second session was a joint forced bi/cuckolding scenario. Because I am a fair Mistress, I decided to punish them both equally, having them bent over the bondage table at either side of me, using my occasional ambidextrousness on their backsides to encourage a rosy glow. Their nipples next each bore the brunt of my will, spinning them up in each others chained nipple clamps and having them attempt not pull on each other as they moved in a circle as a unit, my lash determining their speed. After (a tiny portion of) my sadism was spent, I took my pleasure in the young one. The slave who I found exceedingly unattractive was made to watch as I took what I wanted. Once I reached a conclusion and had recovered, he was permitted to attempt to fumble his clumsy way into whatever it is one would call whatever it was he was doing with his genitals, but took so long that eventually I told him to get out and finish in the loo of a nearby pub. You couldn't make it up.

I am going to have another in the coming weeks, this time with an extremely, overwhelmingly attractive and experienced 33 year old, pierced (of the genital variety) stud. He is totally straight, so will have him all to myself. Again, I found him online and have enjoyed his ministrations many a time both in private and at fetish events. What he does for me physically, you could only dream. It is only natural that your skill levels are inferior, that is, if any woman has ever pitied you enough to let you try. Dates are set for Sunday October 20th and Monday 21st (what a pleasant way to spend my birthday!)

In other good news I have a new toy, in the shape of a Tower of Pain. Here it is in action during a 5 hour bondage session. 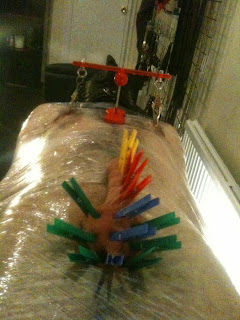 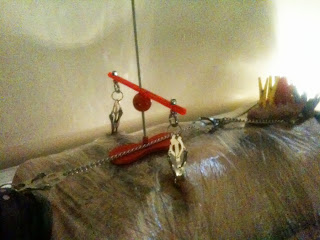 Posted by Rebekka Raynor at 8:37 pm